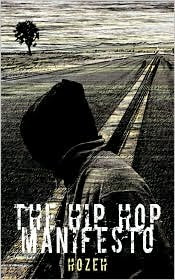 Every now and then there comes a literary gem that shines in spite of every other gem that sparkles may be sparkling in its wake. Authors come and go, but there are a few that shine so brightly that it's hard to be ignored. Such is the case of first time author, Hozeh, a prolific writer who aims to make more of a name for himself despite the fact that Hozeh indeed is a Hebrew word meaning 'a suggestive parallel with the Prophet'. The Hip Hop Manifesto is his latest work. I took time out to ask a few questions of this talented author and here is what he articulated to me....

ACR: If someone were to ask “who are you?”, including wanting you to give them three adjectives to further describe yourself, what would you say and what would they be?

Hozeh: I’ve always thought that the question “Who are you?” was a difficult question to answer. Reason being: when you answer that question, you immediately impose limits upon yourself. I don’t do limits. But, if pressed for an answer, I would have to say that I’m an advocate for change—both personal and in the world at-large—who thinks, writes, teaches, and loves like his heart and mind are on fire…but are not being consumed. Three adjectives to describe myself? Now, that’s a lot easier. Passionate, risk-taker, non-conformist.

ACR: What redeeming value do you get from writing…what do you get out of sharing what you write?

Hozeh: I believe that every writer who is truly committed to his/her craft is inspired by God and called by God. So, I get a great deal of satisfaction doing what God has called me to do. Sharing what I’ve written is part of that calling as well.

ACR: Describe your book in general and the setting specifically, to those who may question the reason you wrote it in the genre it's written in (and of course, without giving too much away, LOL!)

Hozeh: The Hip Hop Manifesto is a sci-fi novel set in the southwestern United States approximately one hundred years in the future after war, famine, disease, and death has left the Earth a barren wasteland. Disease and mutation have gifted a few of the survivors of this holocaust with tremendous cognitive and psychic abilities. They are able to recall every word that’s ever been spoken and written and use The Word for not only its rhetorical power and wisdom but also its energy. The gifted have made a new religion, and its holy book is the Hip Hop Manifesto. El Adrel, the main character, has trouble grasping the subtleties of this faith, and we follow him as he seeks to master it and himself.

ACR: I have to constantly remind myself that this is your first effort at publishing a full-length novel. Was writing always a form of expression for you…if so, explain further?

Hozeh: Writing was not always a form of expression for me. In fact, in undergrad, I avoided classes that required large amounts of writing. I disliked writing. It wasn’t until I got cut from the basketball team in my sophomore year that I started to explore other means of expression. My first poems were written in 1989, my senior year, after hanging out with some new-found friends who had formed a Hip Hop group. I had always had a deep appreciation for Hip Hop, and after being with those guys for a while, my love and respect for the art deepened. To this day, I write in a Hip Hop state of mind, pulling from as broad of a perspective and ideological foundation as I can. Like pure Hip Hop, I refuse to put limits and boundaries on myself as a writer.

ACR: The previous question had a lot to do with the style and substance used by you as a first time novelist, share with us the concept behind and the making of your book... where did the idea originate?

Hozeh: Circa 1998. I was talking with a friend and colleague one Sunday. He remarked that he hadn’t attended church that day but that he had listened to Stevie Wonder. I said to him that listening to Stevie is as good as goin’ to church and that I’ve gotten “the ghost” from listening to his music. I went on to list several other artists who given me religious experiences. The idea that works other than the Bible, Torah, Koran, Bhagavad-Gita, etc. can be “of God” began to take shape.

ACR: Let’s talk more about how and why you chose the unique title for the book and what significance it had on the story line?

Hozeh: (cont. from above) Soon, I asked myself, what if Hip Hop was the basis for a religion, and if it was, what rituals would it have? In what way would salvation be achieved? What would be its holy days? Would there be a Sabbath? Who would be its prophets? What text would its disciples read from? A Hip Hop manifesto, perhaps.

ACR: This story reads like a movie, and I won’t be surprised if there’s a script being written for it. (If indeed there is, please explain further). Tell us then, the methodology used to create and weave the characters throughout the book to enhance the back story and other plot twists.

Hozeh: I’m in the process of adapting it for a television series. To me, it would fit best as an HBO series. A movie wouldn’t do the depth and scope of the novel justice. The methodology used to create and weave the characters throughout the book, story, and plot is from a Hip Hop foundation. Countless hours were spent finding the right rap quotes by listening to tapes, CDs, and browsing the internet. In a sense, I would do what Rakim, of Eric B and Rakim, would do: “I start to think, and then I sink into the paper like I was ink. When I’m writing I’m trapped in between the lines. I escape when I finish my rhymes.” In other words, you have to become totally immersed in the subject matter as an actor would immerse himself into a character.

ACR: From idea to bookshelf, to what effect do you owe any modicum of success to the fact that your book is now in print…. in other words, who and what is responsible most for bringing it to fruition?

ACR: What is your favorite scene in the book, and why does it hold such significance to your train of thought?

Hozeh: My favorite scene is in chapter 39 when El has a talk with his inner child. That scene reminds me that there is good and bad in all of us and that to judge anyone is a self-defeating, futile gesture. Chapter 39 also reminds me of Jesus’ quote, “Father forgive them for they know not what they do.” As I told a colleague once, “We are just men; we’re not meant to know everything.”

ACR: What’s next on the horizon for you besides marketing this book and letting the world know that they should read it?

Hozeh: I plan to further explore (thinking, writing, creating, etc.) what I consider to be the greatest challenge facing humankind today: human rights. “We hold these truths to be self-evident, that all men are created equal, that they are endowed by their creator with certain unalienable rights, that among these are Life, Liberty, and the pursuit of Happiness.” This excerpt from the Declaration of Independence is one of the most sacred utterances enunciated and penned by the hands of humankind. I have long held that a person deprived of life is dead, a person deprived of liberty is a slave, and a person deprived of the ability to pursue happiness will become a monster. To let any of those consequences befall anyone is to betray the most fundamental thing that makes a person an American, or dare I say, a human. Indeed, how can you call yourself an American if you are in opposition to it?

Hozeh: At this stage of the game, you don’t have to wait for a major publishing house to publish you. You can do it yourself…and keep your rights. However, be smart about it. Find a good editor. Know and understand all of the different ways you can market yourself. Lastly/firstly/most importantly, write something that will get you noticed. BE PROVOCATIVE!